What Really Happened in Peru (The Bane Chronicles, #1) 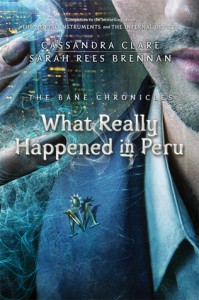 2.5-3 starsCute little short, but not very informative... I'm not sure about this "pairing" of other YA authors with Cassandra Clare - seems like more of a publisher's gimmick to get readers to buy the lesser known author's works. If those works weren't $12.99+ per Kindle offering, I might just comply. But that's a lot of moolah to spend on a new author (for me).The focus of the Bane Chronicles is, of course, Magnus Bane. Magnus is one of my favorite characters from Clare's The Mortal Instruments and The Infernal Devices series. There were hints and teases in these books about Magnus and how he's been banned in Peru. This book supposedly tells us why.What we find are 4 little stories that take place over the years (from 1791 to 1962) telling us of a few of Magnus' visits to Peru. In most, his warlock pal, Ragnor Fell, is with him. And while the visits are fun, we don't really learn anything. That's my biggest complaint about this book. It's fun, but does any of this mean anything? Other than the names I know already, will any of this play a part in future TMI/TID books?There are laughs and smirks at Magnus and his behavior - notably, the story of how Magnus tried to learn to play a musical instrument. But the story that caught my interest the most was the shortest and most disappointing in the end - the last story set in 1962. I'm hoping that there is something MORE forthcoming in either future of The Bane Chronicles or in the last of the TMI books.The writing seems spotty and choppy. As if, perhaps, Clare handed off an outline and some character briefs to her co-author Sarah Rees Brennan, and Sarah attempted to write the stories. I'm not saying that Sarah isn't a good writer, simply that these stories seemed "off" somehow.So my rating is based on the following:1. The reason WHY Magnus was banned from Peru is NEVER ADDRESSED. After the 1962 story, we're simply told that the High Council of Peruvian warlocks met in secret and sent Magnus a latter banning him on pain of death for "crimes unspeakable".2. The choppiness, spottiness, and just something "off" about the overall writing. I felt as if I'd been picked up and put down suddenly by a whirlwind at times - just random "drops" and lack of transitions. A lot is taken for granted in reading these short stories. You can't possibly enjoy or appreciate them without having read some of Clare's other works, so they aren't standalones, IMO. If there was a true partnership between Clare and Brennan, I didn't sense it. It wasn't up to Clare's usual style, for all that Magnus and the other known characters are her creation; and not being familiar with Brennan's writing, I can't speak for how the writing here does or does not fit her style. But something was just "off" - enough that it irritated me.3. The plain SHORT-ness of the short. Again, it felt as if there was more to tell. But because The Bane Chronicles is a "serial" - latest fad in the ebook publishing world - the intent is clearly to string-along the readers, so that we continue buying. These little stories could have been so much more developed without forcing it into novella status; a bit more "meat" would have been appreciated.The first installment is FUN, but very short and not very developed. It felt more like a big tease, which Magnus would so hate, more than the start to something good.