To Wed A Wicked Highlander: OK Highland Romance/Historical Fiction, But Not A Real Bad Boy Of The Highlands 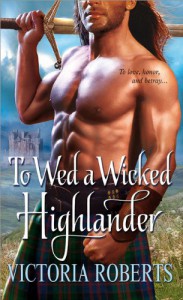 This book was provided as an ARC by Netgalley and the publisher in exchange for an honest review.

This 3rd book in the trilogy is similar to the other two: it's comfortable and familiar, with hunky alpha-male Highlanders and feisty but secretive heroines. It follows the "rules" of its genre. But the bad boys aren't really so bad.... and that's why I can't give the book more than 3 stars.

Sybella (Ella) MacKenzie is forced into a marriage with the chief of the warring clan MacDonell, Alex MacDonell of Glengarry. A generation or so ago, the MacDonell's stole the Seeing Stone that helped the MacKenzie clan success in wealth and battle, and Ella's father, now the MacKenzie chief, wants it back. So he decides the best way is to have Ella on the inside - appease Alex MacDonell with a wife, while that wife finds the Seeing Stone. Once Ella finds it, her father fully intends to declare the marriage invalid, take back his daughter and the stone, and marry her to his other rival clan, the Lewis clan.

But Ella isn't aware of all the machinations, like her brother Colin is. She's frightened to marry into the MacDonell clan, but just a few years back, she ran into Alex MacDonell when she and her brother were swimming in the MacDonell swimming hole. She was immediately taken with Alex's good looks, and he seemed to be charmed with her as well. They exchanged light flirting banter and went their separate ways. When she sees Alex again on her wedding day, she's struck anew at how handsome and brawny he is. But Ella can't seem to find time to search for the stone; she's constantly guarded by Alex's men. While Alex seems to trust her, the MacDonell clan does not. So Alex compromises by asking his guardsmen to tend to his wife's safety.

As Ella gets to know Alex's clan, especially his Aunt Isabeail, she's torn between duty to her father and the kindness of her husband and his clan. That intensifies when Alex's cousin Rosalie, her infant son, and her husband Ciaran MacGregor of Glenorchy come for an extended visit. But Ella's father decides things aren't moving fast enough, and he sends an archer to put Ella's safety in jeopardy, thus hoping that Alex will move Ella inside and give her time to search for the stone.

But, of course, in the end, Ella discovers that her father's ambitions go beyond her well-being and happiness. When the archer is discovered wearing a Lewis tartan, Ella's father lies to Alex's face, trying to get Alex to kill his Lewis enemies or be killed himself. And then the inevitable moment when Alex realizes that Ella's after the Seeing Stone and hasn't been completely honest with him. That deeply hurts Alex, because after they were married, Alex asked Ella to always be honest with him, regardless. So we get The Big Misunderstanding between Ella and Alex in play.

However, all's well that ends well... as usual.

My BIGGEST COMPLAINT about this book is that Ms. Roberts didn't do her research. At the time in history that she's set this book (Scotland 1606), the MacGregor clan was outlawed - the name and the tartan. No MacGregor would have been allowed to hold a title and lands, as Ciaran MacGregor, Rosalia's husband is. And while Rosalia and Ciaran are only guests in this book (the 2nd book being theres), that one little fact really disturbed my enjoyment of the books.

Another nit is that the book is overly predictable, which makes it sometimes feel long and drawn out. But I will give Ms. Roberts credit for building engaging characters. I cared about Ella and Alex and what would become of them. I wanted their happy ending.

Overall, this series is a decent read. But it's not a great read, and for that reason, I'll read the ARCs or borrow the books from the library rather than purchase them for my own Kindle library.