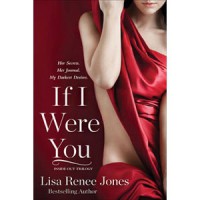 2nd read: On this re-read, a couple of things stand out to me:

1. Sara seems to be fake to me - overblown and over-dramatic. It could be my mood. But for all her supposed background of growing up with money, she surely doesn't act like it. It's as if Ms. Jones started her out naive and lower middle-class and then decided that didn't quite fit or was too close to the FSOG series... so voila! Let's give her a powerful, controlling CEO ex-lover and an upper class, controlling father with lots of money. So Sara knows about money and has had it. But now she doesn't

2. Sara's deep insecurities - She makes a big deal out of Chris being so "damaged and broken" and that she is, too. But every little thing seems to make her come apart. This gal is so needy and desperate at times, it floors me. And this big secret hanging over her head?

OK, I read it. I was skeptical because it was touted as "50 Shades" meets "Basic Instinct"... and I'm tired of any contemporary romance with a hint of steam being compared to Fifty Shades of Grey and the 3-book series.

So... what I discovered is a more mature, grown-up version of 50 Shades. One that is much more palatable. Neither character in the romance is a young nit-wit or a raging control freak. They don't spout the same lines over and over and over again at one another.

This book is more subtle... more silk... more seduction. It pulls you in gradually. And while it might be predictable (despite the fact that books 2 & 3 aren't out yet), the story and the characters are just intriguing enough... just sexy enough to hold your attention and leave you wanting more. Like when you finish eating a really, really good chocolate - that last little hint left on your tongue is so satisfying, and yet, you know that you'll eventually want more. You don't *need* more, and you won't *demand* more, but you know that when the chance comes to eat that next chocolate, you'll be more than ready for it -- welcome it eagerly, and devour it just slowly enough to savor.

Yes, there is quite a bit of suspension of disbelief on the reader's part. But not in such an obvious or crass way as in 50 Shades. And the characters are much more likeable, even though the guy's penthouse is almost too reminiscent of Mr. Grey's place. Except this guy paints, rather than play the piano.