Sci-Fi YA That Beats The "X-Files"! 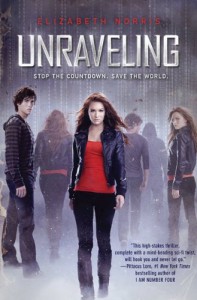 Quick Look
Lori's Rating: 4 stars!
Recommended For: X-Files & Sci-Fi/Fantasy fans who like a little Urban-Fantasy thrown in for good measure

Book Summary
Just 2 days before starting her junior year in high-school, Janelle Tenner is killed by a runaway truck - a 1997 Velociadad. Yep, a truck never made in the U.S. or in this world. The driver was dead at the wheel and had strange burns... radiation burns that other victims around San Diego are turning up with, too. Janelle's FBI dad has been investigating.

But the amazing part is that Janelle is now alive, thanks to Ben Michaels. Somehow, he brought Janelle back to life and completely healed her broken bones (including broken back) and all her previous scars. No one believes Janelle, not even her BFF, Alex. But Janelle's determined to get to the bottom of the mystery of Ben Michaels - the guy she thinks is just a Stoner.

But Ben is so much more... and in unraveling the mystery of Ben and how he healed her, Janelle and Alex also unravel the mystery of the radiation burn victims, and the mysterious countdown device that her father found and has locked somewhere at the FBI. Can Janelle stop the countdown and solve the mystery in time?

Lori's Review
Wow! This book knocked my socks off! It seems like such a harmless YA book. But it grabs you by the throat and doesn't let up until you're done reading it. And it leaves you gasping for MORE! Thank goodness there's a sequel Unbreakable and a short in Ben's POV called "Undone".

The "chapter" titles are confusing at first. But stick with it - you'll see what they're all about. I confess, I didn't pick up on it until the answer was revealed, I was so caught up in the story.

I appreciated Janelle's (J-Baby) strength. She's smart and plucky, yes. And while it might seem as if she rushes in, Janelle's got a lot of great instincts and training from watching her father all these years. She knows how to investigate and interrogate. She knows how to blackmail, when she needs to. She's been strong, because she's had to be for her brother Jared.

It's tough not to be irritated with her father over mostly ignoring her mother's bi-polar and how it affects the family. The *family* is really Janelle and Jared. Their father is working a lot, and even when he's home, he's working. But he does love his kids, and he tries to do right by them. I think, in part, he's avoiding the whole issue of their mom, because he doesn't want to deal with it.

Alex is such a great best friend - I love him! I'm super glad that he doesn't have a crush on Janelle, as most guy BFFs seem to have on their girl BFFs. It's nice to have that solid friendship without the undertones of him always wanting to kiss her or have her notice him. Alex's mom is a hoot, although I'm glad that she's not my mom!

Ben and his friends Elijah and Reid are ... very mysterious. Ben always seems to be around, watching, and Janelle never noticed him before. Ben is really sweet, and my heart goes out to him; he's been trying to do the right thing for everyone, and that only gets him into more trouble. But he's really smart, too - much more intelligent than anyone other than his closest buds have given him credit for, except perhaps the one teacher. He's been deliberately hiding and keeping his head down, and yet... you just know he's missing his real family and doesn't feel love like he deserves.

Their short romance is sweet, too - very PG. Ben's not "icky" or pushy; he defends and protects. Janelle's got her head on straight; as much as she's now captivated by Ben, she knows that rushing in isn't the right thing to do, especially with everything going on around them. And when it's time, she helps Ben make the right decision - or is it?

(Janelle at the end of this book) But I'm alive. I'm alive. More alive than I was before any of this happened. Life if a fragile thing. Apparently the whole world is fragile too. But it'll beat on. Because it has to.